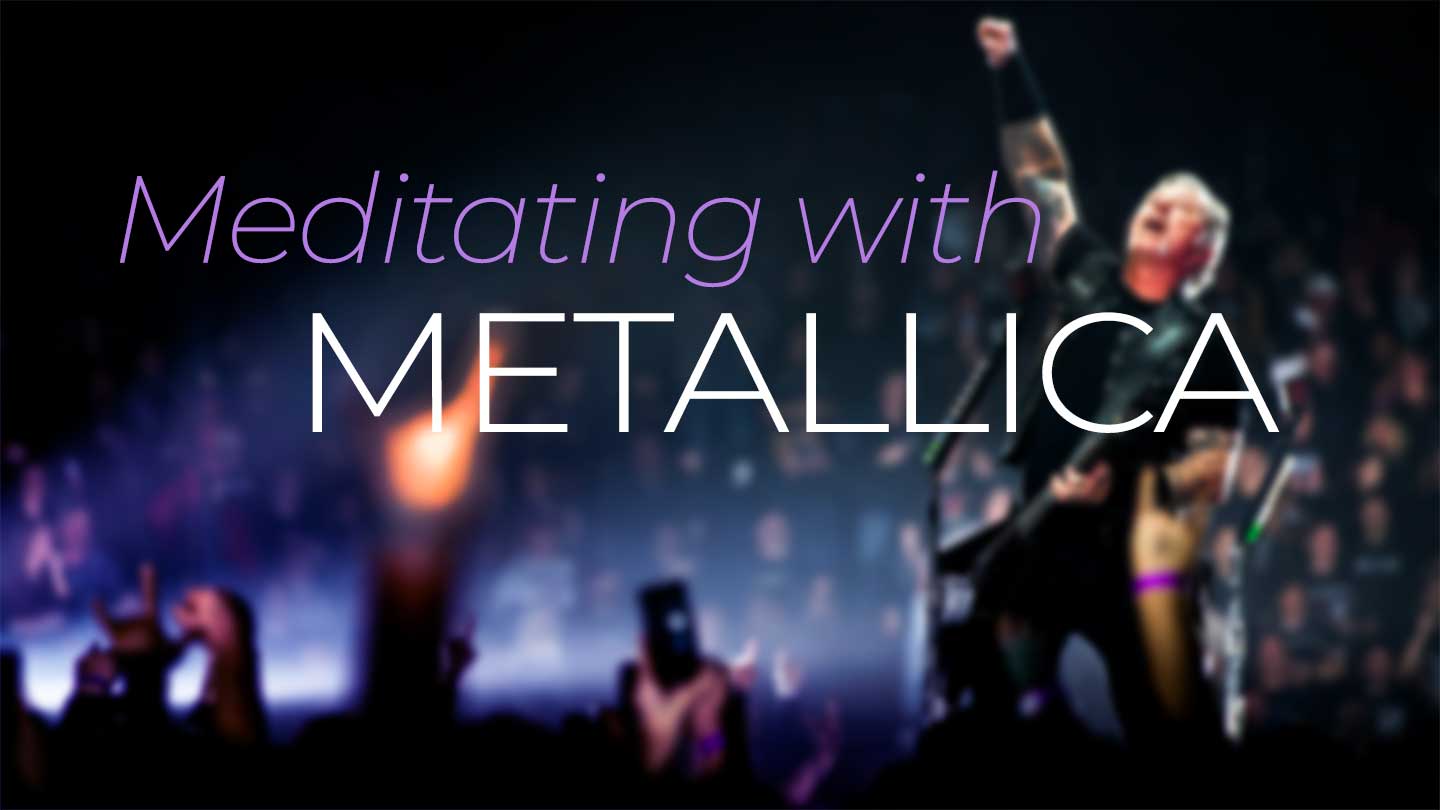 From the moment people hear that I am a fan of hard rock music, the usual flurry of questions arises. I thought you were an empath? Doesn’t that lower your vibration? How is that a part of the light? Yes, I am an empath. No, it doesn’t lower my vibration. And, yes — it is a part of the light. Now let's dive into the details. To be clear, I don’t listen to heavy metal filled with screaming or super dark lyrical imagery. I listen to music with deep bass lines, driving guitar chords and beautifully melodic vocals. Sometimes a song describes chapters of the hero's redemption. Other times, it's "Dark Night of the Soul — The Musical". All the while, it offers a sense of empowerment and excitement that stimulates the self-confidence needed to help an empath ground their light, accept their power, and walk with purpose in a world of unraveling existential hunger. While this isn’t the only way, it’s a very enjoyable way for me. How does this apply to you? Keep reading. You’ll see.

"Sometimes a song describes chapters of the hero's redemption. Other times, it's "Dark Night of the Soul — The Musical."

Music is theatrical. It’s how the lines get filled in with vibrant color for the performance of living art we call our lives. No matter the genre, music can put words to feelings we haven’t quite processed, while pinpointing greater meaning throughout the significance of our journey. For me, music, whether hard rock, conscious hip-hop, electronica, or even pop, is the heartbeat of my soul’s adventure. Whether heard at the gym, as the backdrop while cooking, or even in meditation, music is the thread of sound weaving together all moments in time, where silence is not the absence of noise but the space through which my true self has been found. At the core of my being, within the space between my ears, and throughout the cells of my body resides a silence aware of itself. From that depth of silent seeing, a wellspring of creative expression infinitely pours out, whether as the teachings I channel, the poetry I write, the meals I create, or the music I love. For me, hard rock music acts as a soundtrack to the defeat of darkness. Not as if darkness needs to be defeated, but celebrating the presence of light within me that is so instinctively clear on all the light includes, I live from a space that darkness cannot deny. What may seem contradictory to some, the music I love celebrates the victory of the Buddha dwelling within the paradise of my awakened heart space. It honors a lifetime of training I have undergone along my journey with the Universe to recalibrate my nervous system to be able to handle a spectrum of frequencies and intensity for the space I emotionally and energetically hold for Earth’s Ascension. Many still undergoing this extensive process might listen to this type of music and get triggered, even believing their vibration is lowering as a result of the sounds they hear. Let’s demystify this common misunderstanding.

What may seem contradictory to some, the music I love celebrates the victory of the Buddha dwelling within the paradise of my awakened heart space.

What many call ‘having their vibration lowered’ is often an esoteric way of admitting — “My spiritual ego got triggered and instead of admitting it, I’d rather place myself above it.” Along the journey of evolution, the lingering conditioning hiding from the healing it doesn’t know is its eternal liberator can commonly cloak in spiritual personas and belief systems — dividing anything into categories such as high vibe and low vibe. While there are such forces as good and evil, I appreciate a more taoist interpretation of such polarities where good means 'ready to walk in accordance with divinity' and evil being 'that which isn’t ready for such a path of surrender'. Of course, no matter how much damage evil forces dish out, it inevitably brings more goodness out of the good side, which makes it powerful enough to transform evil back into the inherent goodness it has forgotten itself to be. This is the path of redemption. But that is way too high level of a teaching for a spiritual ego to fathom or comprehend. Simply because, if an ego could see the truth of existential alchemy evolving throughout the play of life — where would there be room for it to derive false power through the judgments and conclusions it draws? For the spiritual ego, the drive is to find and maintain a false sense of power by keeping its engrained categories of perception as separate as possible. This may help you see how even when a spiritual ego speaks about justice and peace, it often furthers a narrative of separation based on the judgments it projects. This is why we focus on what we support, not what we are against, by becoming the change we wish to see.

Music doesn’t lower your vibration. It triggers your ego. An ego that is a cluster of conditions, memories, and beliefs encoded in your body to erupt into release when stimulated by an appropriate amount of intensity. Even when one believes their vibration gets lowered through the instant signs of exhaustion felt, it merely indicates such a release of emotional density to the degree that all your life force energy must serve its purging without enough energy for you to remain conscious. This is also why people fall asleep during group healing events or at meditation retreats. As your nervous system gets rewired through whatever stimulus arises in perception, you are able to have emotional releases without triggering judgments of division and purge cellular memories in naturally abiding awareness. The funny thing about music is, softer more gentle music nourishes a depleted nervous system, while harder more fast paced music can help empty the cellular body. While I am not suggesting to sit in front of a speaker, blast Metallica, and clear your family lineage until you pee your pants, it’s wonderful to learn how music can act as a supplement to the energetic expansion working its way through you. When tired, depleted, and in need of replenishment, softer music offers a supportive cocoon to the space you need. When ready to be motivated, inspired, or ready to open the closet to any remaining skeletons, more fast-paced music can help.

Even when you hear lyrics that seem sad or even angry, it doesn’t mean they're lowering your vibration, but triggering cellular memories where the themes of such words correlate to painful moments from your past. This phenomenon is called an association.

Even when music might just sound downright aggressive or scary to your senses, it triggers a release from your cellular body to empty as many scary or aggressive memories as you are able to process. It is important to remember, none of this should be read from an adrenaline junkie mindset. This isn’t about forcing yourself to walk across a bed of fiery coals just to prove you can do it. Instead, the modern day spiritual path is rooted in getting to know your exact needs and matching each one with an appropriate outlet without judging other outlets that might be equally as therapeutic and beneficial for those whose nervous systems function differently. The first time I meditated to Metallica, I was on a plane headed to lead a retreat on the East Coast. I closed my eyes and watched how each and every song was manifested out of the silence of my eternal being. As I had seen so many times throughout my life, I was simultaneously the sounds heard, the silence aware of it, and the space through which this play of observation unfolded. While the majority of my meditations are resting in direct recognition of silent awareness, my meditations with Metallica celebrate the triumph of a deeply sensitive soul who began his journey overwhelmed by sensation, invisible to the world, and afraid of everything — including himself.

As I had seen so many times throughout my life, I was simultaneously the sounds heard, the silence aware of it, and the space through which this play of observation unfolded.

While hard rock may not be your favorite cup of tea, it is merely a different flavor to the same warm water you enjoy sipping. Undoubtedly, it can be easily dismissed by the high vibe/low vibe rhetoric of spiritual egos who don’t know how to support a cause without needing something to oppose. And yet, beyond the play of contrast and comparison, we find darkness to be a space where light beings undergo their deepest levels of transmutation -- only likely to become an agent of evil when identifying with the cellular memories attempting to be purged. All the while, such a wise view of darkness is only a perspective the light can truly see.